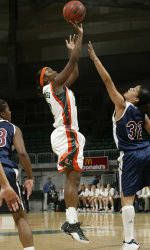 CORAL GABLES, Fla. – Junior Tamara James first double-double of the season was not enough to lead the University of Miami women’s basketball team past Wake Forest Thursday as the Demon Deacons downed the Hurricanes, 78-63, to hand UM their first home loss of the season in their inaugural ACC home game at the Convocation Center.

James scored 26 points and added 10 rebounds to post her first double-double since her freshman season, but Wake Forest (12-4, 1-2 ACC) was able to ride the shoulders of the ACC’s three point leader, Cotelia Bond-Young, who turned in 27 points, going 6-of-12 from beyond the arc, in the win over the Hurricanes (8-7, 0-2 ACC).

The Demon Deacons opened the game on an 8-0 run in the game’s first two and half minutes before going on to lead by as much as 11 less than five minutes from the start.

UM cut the lead to six just over two minutes later, but found themselves down by double figures in the half’s final 10 and half minutes to go into the intermission down, 44-31.

Wake Forest maintained the double figure lead for over six minutes with the start of the second half, but UM was able to put together a 7-0 run to cut the lead to two at the 11:31 mark before senior Yalonda McCormick took a rebound for an unassisted layup to tie the game at 57-57 with just under 11 minutes to play.

The Demon Deacons answered with a 14-0 run, holding the Hurricanes scoreless for over six minutes to pull ahead 71-57 with 3:18 remaining and eventually went on to take the win, 78-63.

McCormick finished with 11 points and was one assist shy of a double-double, recording nine on the night.

Bond-Yound was one of three players for Wake Forest to post double digit points, with Liz Strunk and Erin Ferrell scoring 14 and 10, respectively.

The Hurricanes will head to Chapel Hill, N.C. Monday, January 17 to take on No. 9 North Carolina at 2 p.m. UM’s game with UNC will be carried live on the Sunshine Network and selected Fox Sports affiliates regionally.