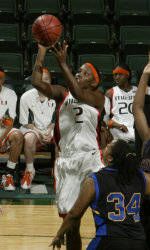 The University of Miami women’s basketball team will travel to Tallahassee, Fla. Sunday to take on in-state rival Florida State at 1 p.m. in UM’s inaugural game in the Atlantic Coast Conference.

The Game
Making their historical debut in the inaugural ACC opener, the Hurricanes (8-5) head to Tallahassee, Fla. Sunday to take on in-state and now conference rival Florida State (13-2) at 1 p.m. This will mark the 26 meeting all-time between the Seminoles, who lead the all-time series at 19-6, and the Hurricanes and will be the first meeting since 1992. The game will feature the ACC’s top two scorers in UM’s Tamara James, who’s 24.5 points per game leads the nation, and FSU’s Roneeka Hodges (17.4 ppg). Sunday’s match-up with the Seminoles will be televised live regionally on the Sunshine Network with Mike Hogewood and Charlene Curtis calling the action. Adam Aizer and Mike Garcia will bring the game live over the airwaves on WVUM (90.5 FM).

The Hurricanes
Looking for their first road win of the season, head coach Ferne Labati and the Hurricanes take to Florida State riding a five-game win streak after downing Coppin State, 93-83, Jan. 2 at the Convocation Center in their last outing. Since a rough 3-5 start, the Hurricanes have bounced back to win their last five, averaging 75.8 points per game while outscoring opponents by 12 points per game during that stretch. UM will look to the hot play of Junior Tamara James, who was named the ACC Player of the Week Monday after averaging 33.7 points per game in three Miami wins last week. The Dania, Fla. native has posted two 30-point outings over the last three games, including a 39-point performance against Fairfield, to bring her NCAA-leading season average to 24.5 points per game. Freshman Albrey Grimsley and senior Yalonda McCormick have also played well of late, averaging 11.3 and 8.4 points over the last five games, respectively. McCormick also leads the ACC in both assists per game (6.2) and steals per game (3.6).

The Seminoles
After an impressive 12-0 start head coach Sue Samrau and the Seminoles have dropped two of their last three games including a 60-49 loss at Montana, who UM downed 55-49 earlier this season, and a 59-58 loss to Georgia Tech Thursday night. The Seminoles feature three players averaging double figures in scoring this season including LSU transfer, Roneeka Hodges, who’s 17.5 points per game is second in the conference behind UM’s Tamara James. FSU’s Alicia Gladdin is second on the team in scoring (11.5 ppg) and first on the team in rebounding (7.4 rpg) while FSU’s Linnea Liljestrand turns in 10.0 point per game this season.