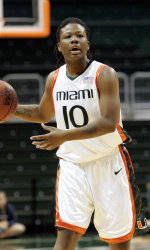 CORAL GABLES, Fla. – Senior Yalonda McCormick posted a double-double with 16 points and 11 assists to go along with junior Tamara James’ 36 points as the University of Miami women’s basketball team rolled past Coppin State, 93-83, Sunday afternoon at the Convocation Center.

With the win, the Hurricanes (8-3) improve their win-streak to five games as the close out the non-conference portion of the 2004-05 schedule. Coppin State falls 8-4 on the year.

McCormick’s double-double, her second of the season, came on a 5-of-10 performance from the field, including a 4-of-4 outing from the free throw line, and a career-high-tying 11 assists.

James led all scorers with 36 points, scoring 19 in the first half, and marked the second time in three games she has scored 30 or more points.

The Hurricanes opened the game on a 16-6 run, highlighted by 12 points from James, before going on to distance the lead to as much as 16 points at 34-18 with just over 10 minutes in the half.

Up by 12 points at the 1:37 mark of the first half, UM surrendered four unanswered points down the stretch to take an eight-point, 49-41, lead into the break.

The second half started similar to the first, with the Hurricanes rolling up the lead to 13 points at 62-49 at the 16:18 mark.

The Lady Eagles answered by putting together an 8-0 run to cut the UM lead to five with less than 13 minutes to play.

The two schools traded baskets over the next five minutes until Miami put together a 16-4 run of their own to lead by 20 at 91-71 with two minutes remaining.

Despite being outscored 12-2 in the game’s closing minutes, the Hurricanes held on to take the 93-83 victory over Coppin State.

The Hurricanes will return to action Jan. 9, traveling to Tallahassee, Fla. to take on in-state rival Florida State in UM’s inaugural game in the Atlantic Coast Conference.