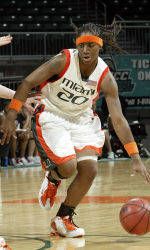 CORAL GABLES, Fla. – The University of Miami women’s basketball team will close out the non-conference schedule of the 2004-05 slate Sunday when they host Coppin State Sunday at 12 noon at the Convocation Center.

The Game
The Hurricanes (7-5) take a four-game winning-streak into Sunday afternoon’s game with Coppin State (8-3). UM and the Lady Eagles will tip off at 12 noon at the Convocation Center in the two schools’ second meeting all-time. The Hurricanes knocked off CSU, 97-68, in Coral Gables in the first meeting in 1998. Sunday’s game will be carried live on WVUM (90.5 FM) and can also be heard live on the web at hurricanesports.com. Tickets are available at $5 for adults and $3 for children and seniors and can be purchased through the Hurricane Ticket Office at 1-800-GO-CANES or online at hurricanesports.com.

The Hurricanes
Miami hosts Coppin State four days after downing Fairfield and Loyola Marymount to win the UM Holiday Classic Championship, extending their unbeaten streak to four games and their home win streak to six games. Junior Tamara James, who was named the UM Holiday Classic Tournament MVP behind a 39-point outing against Fairfield, continues to dominate the opposition, averaging 23.6 points per game which is tops among the ACC. Freshman Albrey Grimsley has come on strong of late, averaging 10.7 points and 5.7 rebounds over the last three games while sophomore Amy Audibert has averaged six points with two starts over the same span.

Coppin State
Head coach Derek Brown and the Lady Eagles head to Coral Gables with an overall record of8-3, posting the best start in the school’s 20-year history. CSU is riding on the waves of two wins to take the championship title at the Coca-Cola Classic Dec. 29-30 in Mobile, Ala. CSU downed South Alabama, 70-69, Dec. 29 in overtime on a game-winning free throw by LaKesha Wills with no time left before moving on to upend Jackson State, 60-47, the following day to claim the title. The Lady Eagles have four players averaging double figures in scoring led by Sherrie Tucker, who is averaging 15.2 per contest followed by Leisel Harry’s 14.1 points per game. Harry is second on the team, averaging 8.1 rebound per game, just behind Talia Sutton, who posts 9.1 per game.