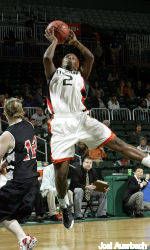 CORAL GABLES, Fla. – Junior Tamara James had a career-high 39 points while tying a school record with 17 field goals to lead the University of Miami women’s basketball team (6-5) past Fairfield (2-7), 84-70, Tuesday night at the Convocation Center in the first day’s action of the UM Holiday Classic.

James’ 39 points topped her previous career-best of 37 set last season and her 17-of-23 outing from the field tied the school for field goals in a game. James shares the record with former Hurricanes Joani Bowles and Wendy Foote, who each hit 17 from the field in a single game.

James also led all players with nine rebounds and had a season-best five steals.

Senior Yalonda McCormick recorded eight assists on the evening and added six points and four rebounds in the UM victory while sophomore Amy Audibert and freshman Albrey Grimsley each turned in eight points.

The Hurricanes and Stags would trade baskets in the opening minutes with neither team leading by more than four 11 minutes into the game.

Trailing by three at 36-22 with under four to play in the half, junior Katie Hayek landed a three to knot the game at the 2:31 mark.

Following a free throw by Lindsay to give the Stag’s a one-point lead, James answered with one of her four three’s on the night to put UM up by two. Not to be out-done, McManus responded with a three of her own to give Fairfield a one-point lead once more.

The Hurricanes put together four unanswered points in the final 33 seconds, including a jumper by James as time expired, to take a 43-40 lead into the half.

UM opened the margin to seven less than two minutes into the second half and wouldn’t allow Fairfield within three points of the lead until the 6:21 mark, until Ivana Podrug hit a lay up to close the game to two at 63-61.

McCormick hit a pair of free throws just second later to put UM up and the Hurricanes would hold on to the lead over the next two-and-a-half minutes as the Stags stayed within six points of the lead.

McManus cut the lead to four at 73-69 with a three with just over two minutes remaining, only to be answered by an 11-1 run by Miami to close out the game en route to an 84-70 victory.

With the win, the Hurricanes advance to the Championship Game of the UM Holiday Classic where they will take on Loyola Marymount, who advanced with a 76-72 victory over Hofstra earlier Tuesday, at 7 p.m. immediately following the consolation game scheduled for 5 p.m.