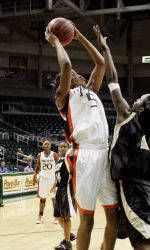 Hurricanes Take on Fairfield at the UM Holiday Classic

CORAL GABLES, Fla. – The University of Miami women’s basketball team will look to win three in-a-row for the first time this season Tuesday evening when they host Fairfield University at the Convocation Center at 7 p.m. in the second game of the UM Holiday Classic.

Tuesday’s game with the Stags will be broadcast live on WVUM (90.5 FM) in the South Florida area and can also be heard live on the web at hurricanesports.com, which will also feature live stats. Tickets are just $5 for adults and $3 for children and seniors and can be purchased through the Hurricane Ticket Office at 1-800-GO-CANES or on the web at hurricanesports.com.

The Hurricanes
Coming off a 55-49 victory over Montana their last time out on Dec. 20, the Hurricanes (5-5) will attempt to win three straight for the first time this season Tuesday night against the Stags. Junior All-America candidate, Tamara James, who is ninth all-time at Miami in career points, leads UM and the ACC in scoring, averaging 21.8 points per game this season. James’ 7.1 rebounds per games is also tops among all UM players. Senior Yalonda McCormick is second to James in scoring this season, turning in 11.8 points per contest while posted four steals per game. Senior Fallon Phanord continues to be a steady player in her final campaign in 2004-05, averaging 5.7 points and 5.2 rebounds per game.

Fairfield
Playing for the first time since a 65-55 loss at Hartford Dec. 13, Fairfield University (2-6) heads to Coral Gables having lost their last three games. Senior Janelle McManus leads the Stags, averaging 13.6 points per game. Close behind McManus is senior Cathy Dash, who’s turning in 13.4 points per game and leads Fairfield with 7.4 rebounds per game. The Stags will also look to build on the impressive play of freshman Stephanie Cziria, who garnered MAAC Rookie of the Week honors on Dec. 20 after scoring 16 points and nine rebounds at Hartford.