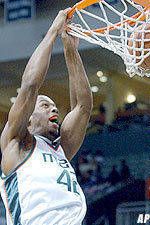 Hamilton finished with 10 points and a game-high 10 rebounds off the benchfor the Hurricanes (6-2). Miami has now won five straight and six of its firsteight under first-year coach Frank Haith.

Miami managed just a 30-23 halftime lead, but used a dominant second half toput the game out of reach.

The Hurricanes opened the half with an 18-5 run, taking a 48-28 lead on athree-point play by guard Robert Hite with 13:52 remaining. Hite scored sevenpoints in that run, including a hanging reverse layup on a lob pass from Diaz.

Stetson would never get closer than within 18 points of Miami’s lead afterthat, and fell behind 70-34 on a basket by freshman guard Antoine Mayhand with5:10 remaining.

E.J. Gordon scored a game-high 16 points for Stetson (2-4), which lost itsthird road game in as many attempts this season.