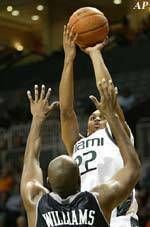 King’s triple-double included a school- and Atlantic Coast Conference-record13 blocks, eight of which came in the first half. The forward blocked six shotsin the first 4:10, and Miami led 33-30 at halftime.

Miami (2-2) opened the second half with four points apiece from Hite andguard Guillermo Diaz, who scored a career-high 27 points on 11-of-13 shooting.

Florida Atlantic (0-3) cut Miami’s lead to 41-36 on a three-pointer byforward Mike Bell, who led the Owls with 23 points.

Florida Atlantic never got closer than 11 points off Miami’s lead afterthat, and King made school history when he grabbed his team-high 10th reboundwith 1:11 left to play.

The Hurricanes shot 59.4 percent in the second half, with Hite connecting on11 of 14 field goal attempts.