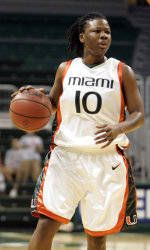 Miami scored the game’s first five points, but found themselves down 17-7 at the 12:24 mark of the first half following a 17-2 run by the Hawks. After chipping away at the UMES lead over the next six minutes, McCormick tied the game at 20-20 on a fast break before junior Tatjana Marincic put Miami ahead by two on the next possession with 5:15 remaining in the first half.

Capitalizing on a turnover by Toni Kennedy of UMES, junior Tamara James, who hit 16 of her 24 points in the second half, scored the first bucket of the second half to put UM up by 11. Miami would maintain a double-digit lead for the remainder of the game, leading by as much as 24 at one point while never allowing UMES to come within less than 11 points of the lead to close out the 88-64 victory.

Miami forced a season-best 32 turnovers with 20 steals against the Lady Hawks. Marincic, who finished with 11 points, along with senior Fallon Phanord led the Hurricanes with seven rebounds each.

McCormick and James were both named to the LIU Turkey Classic All-Tournament team, averaging 23.5 and 23 points, respectively, in UM’s two games over the weekend.

Miami returns to action Tuesday, Nov. 30, traveling to Fairfax, Va. to take on George Mason at 7 p.m. in what will be the Hurricanes’ fourth road game in eight days.