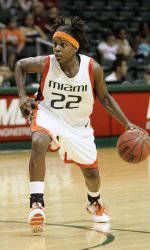 The University of Miami women’s basketball team heads to Brooklyn, N.Y. Friday to square-off with the University of Oregon at 4 p.m. in the first day of action at the LIU Turkey Classic hosted by the Long Island University.

Following wins over Gardner-Webb and TCU at last weekend’s Miami Jam, the Hurricanes (2-1) look to rebound from a 63-53 loss at Harford Tuesday night in their last time out. Junior Tamara James led UM with a 30-point outing against the Hawks, but as a team, the Hurricanes were held to just 27 percent shooting from the field.

Oregon (2-0) hits the road for the first time this season Friday against the Hurricanes. The Ducks opened the season with a pair of wins at home, downing Portland, 63-46, Nov. 19 and most recently defeating Southern, 65-52, Tuesday night.

This will mark the first meeting between Miami and Oregon.

The Hurricanes’ game with Oregon will be carried live on WVUM 90.5 FM and can also be heard live via the web at hurricanesports.com.