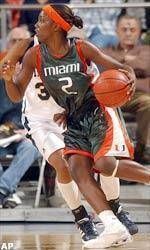 CORAL GABLES, Fla. – Despite a 30-point outing by junior Tamara James, the University of Miami women’s basketball team could not overcome a 17-of-64 performance from the field to fall to the University of Hartford, 63-53, Tuesday night at the Reich Family Pavilion in West Hartford, Conn.

James’ 30 points led all scorers, but proved to be the Hurricanes, who fall to 2-1 on the year, only offensive showing as only five other UM players recorded points on the night. Hartford’s (1-0) Danielle Wexler led the Hawks with 21 points, going 5-of-8 from behind the three point line.

The Hawks scored the first basket of the night before going on an 11-3 run through the game’s first six and a half minutes. With 6:20 left to play in the first half, freshman JoJuana Jones hit a shot from just outside of the lane to cut the UH lead to one at 17-16.

Hartford would answer, scoring 11 unanswered points to lead 28-16 with less than two minutes remaining in the half. Following a James lay-up with 31 seconds on the clock, the Hawks took a nine point lead into the locker room, leading 29-20.

With the start of the second half, Miami would fall behind by as much as 10 early on, trailing 37-27 a little over three minutes into the half. UM cut the Hartford lead to five at the 15:05 mark and then down to four on a jumper by junior Katie Hayek with 11:30 on the clock.

Harford, who was in the double bonus with just over three minutes remaining, would hit two of their 13 free throws in the game’s final minutes while allowing just six UM pionts down the stretch to keep the Hurricanes at bay and hold on to the 63-53 victory.

“We are really going to have to learn how to play hard on the road if we are going to be successful this season,” head coach Ferne Labati said afterwards.

“I don’t think our players thought this Harford team was as good as they were,” Labati commented on the Hawks’ performance. “We came out, got rattled and never recovered. (Harford) is a great team. They are scrappy and play with a lot of heart, and I think anybody who plays them this season is going to see that.”

The Hurricanes will return to action Friday, Nov. 26, traveling to Brooklyn, N.Y. to take on Oregon at 4 p.m. as part of the LIU Turkey Classic hosted by Long Island University. Miami and Oregon are slate to square-off at 4 p.m.