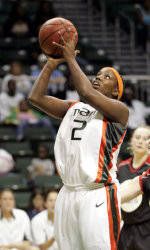 James, who fell short of a double-double with nine rebounds, was named the tournament’s MVP, averaging a tournament-best 18 points in two games over the weekend, while McCormick was selected to the Miami Jam All-Tournament team.

Miami and TCU traded baskets through the first two minutes of the game until UM put together a 8-0 run capped off by a three by freshman Albrey Grimsley to take a 12-5 lead at the 14:30 mark.

A James’ basket brought the Hurricane lead to 10 with less than nine minutes to play before senior Fallon Phanord scored three of her career-high seven points to extend the lead to 13 with 8:13 left in the half.

The Lady Frogs, who were held to just 15.6 percent shooting in the first half, would cut the lead to six with a little over two minutes left in the half, but UM answered with a pair of McCormick free throws to take a 28-20 lead into the break.

Leading by fewer than double-digits only three times and by as much as 19 points twice, Miami dominated the second half behind a 17-of-29 shooting performance from the field and led by no less than 11 in the game’s final 13 minutes to go on to win 68-57.

“I thought we played well on every possession,” head coach Ferne Labati said. “We made some mistakes early in the game, but we played hard, made adjustments and came out with the win.”

“This game gives our team a lot of confidence,” Labati said of the win over TCU. “We haven’t won a big game yet this season, and we proved today that we are definitely capable.”

Sophomore Imani Dhahabu also scored in double-figures against TCU with 10 points against the Lady Frogs and junior Tatjana Marincic joined James with a team-high nine rebounds.

The Hurricanes will return to action Tuesday, November 23, traveling to West Hartford, Conn. to take on Hartford at 7 p.m.