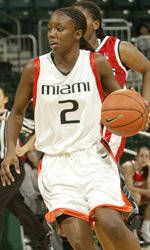 CORAL GABLES, Fla. – After trailing by four points at the end of the first half, The University of Miami women’s basketball team out-scored Gardner-Webb 39-17 in the second half in route to a 65-47 win over the Bulldogs Friday night at the Convocation Center in the opening round of the Miami Jam.

Junior Tamara James led all Hurricanes with 19 points and added eight rebounds on the night while senior guard Yalonda McCormick scored 10 with five steals. Gardner-Webb’s Sequenta Blackman led all players with 22 points, 15 of which came in the first half.

With the win over the GWU (0-1), the Hurricanes (1-0) advance to the Championship Game of the Miami Jam where they will face TCU, who earned a birth into the final game with a 65-60 win over UCLA Friday.

The Bulldogs opened with an impressive 11-0 run, with eight points by Blackman, and extended the lead to as much as 15 at 19-4 less than eight minutes into the game. The Hurricanes chipped away at the GWU lead and used a 7-0 run in the final five minutes to head into the half down six points, 30-24.

James hit a jumper at the start of the second half to cut the GWU lead to two and four minutes later junior Katie Hayek tied the game at 34-34 with a pair of free throws. The Hurricanes would take the lead at the 10:57 mark when freshman JoJuana Jones dove to recover a loose ball and found an open James in the corner to sink the three, putting Miami up 39-38.

Miami would maintain the lead for the remainder of the half, leading by as much as 17 on the heals of a 8-0 run late in the game to pull out the 65-47 win.

“We definitely have to work on our defense, especially defending a team’s best player,” said UM head coach Ferne Labati on Blackman’s 22 points.

“We came out with the win tonight and we’re happy about that. We know we have to work on some things, but we are moving on,” Labati added.

The Hurricanes improve to 29-3 all-time in season-openers while Labati is now 16-1 all-time in UM’s season debut.

Miami and TCU will square-off Sunday at 2 p.m. in the Miami Jam Championship Game immediately following the consolation game between Gardner-Webb and UCLA.