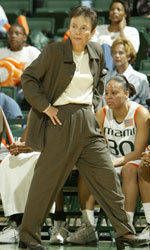 The University of Miami women’s basketball team will kick-off the 2004-05 season Friday evening, hosting Gardner-Webb University at the Convocation Center at 7 p.m. as part of the Miami Jam, a four-team tournament featuring the Hurricanes, Gardner-Webb, TCU and UCLA.

This will mark the first meeting between the Bulldogs of GWU, who will also be playing in their first game of the season, and the Hurricanes.

Entering her 17th season at the helm of the UM women’s basketball program, head coach Ferne Labati returns eight letterwinners from one of the most successful teams in school history, posting an overall record of 22-7 while advancing to the NCAA Tournament in 2003-04, as she prepares to lead the Hurricanes into their inaugural season into the tradition-rich Atlantic Coast Conference in 2004-05.

Heading the UM contingent are senior guard Yalonda McCormick and junior forward Tamara James. McCormick returns for her senior season after lading the Hurricanes with 5.4 assists per game while averaging 12.2 points per contest in 2003-04. James enters the season as a preseason All-ACC selection and Naismith Trophy candidate after leading UM in scoring the past two seasons.

Friday’s game can be heard on the airwaves on WVUM 90.5 FM, the home of women’s basketball, with Adam Aizer and Jeremy Marks-Peltz calling the action live.

Tickets are just $5 for adults and $3 for children and seniors and can be purchased through the Hurricane Ticket Office by calling 1-800-GO-CANES or on the web at hurricanesports.com.