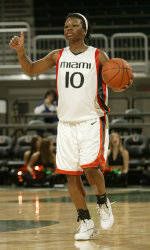 Hurricanes Close Out Preseason with Win Over EA Sports

CORAL GABLES, Fla. – Senior Yalonda McCormick fell one assist short of a triple-double, scoring 16 points with 10 rebounds and nine assists, as the University of Miami women’s basketball team downed EA Sports 82-81 in the final exhibition game of the 2004-05 season Saturday night at the Convocation Center.

McCormick, who also had four steals on the night, was one of five UM players to score in double figures, led by junior Tamara James, who turned in a team-high 19 points while grabbing 10 rebounds.

Freshman Albrey Grimsley went 5-of-6 from behind the three point line in route to a 17-point outing and senior Fallon Phanord added 16 points to lead the Hurricanes to victory.

The Hurricanes took the lead a little over four minutes into the game when Phanord found an open McCormick for a jumper that put UM up 6-5, from which point Miami never trailed, taking a 41-33 lead into the half.

The Hurricanes will open the regular-season Friday, November 19, hosting the Miami Jam which will feature Gardner-Webb, UCLA and TCU at the Convocation Center. Miami is slated to take on Gardner-Webb in the opening round Friday at 7 p.m. immediately following the UCLA-TCU game at 5 p.m.