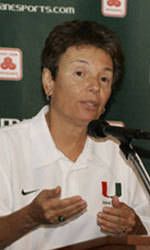 The <?xml:namespace prefix=”st1″ ns=”urn:schemas-microsoft-com:office:smarttags”?>University of Miami and head women’s basketball coach Ferne Labati announced today the signing of Brittany Denson to a National Letters of Intent for the 2005-04 season in the November early signing period.

Denson, a 6-3 center out of Winter Haven High School in Winter Haven, Fla., is considered by most recruiting services to be the top post player coming out of the state of Florida and one of the best players in the country in the class of 2005.

“Brittany is a very athletic player with a determination to be one of the best,” said Gibson of Denson. “She has high expectations for herself and with her work ethic she will definitely surpass those goals.”

Winter Haven, Fla.Ranked one of the top five players in the state of Florida by FloridaHoops.com.

Ranked the No. 77 player overall in the class of 2005 by the Blue Star Report.