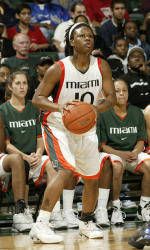 CORAL GABLES, Fla. – The University of Miami women’s basketball team will take to the court for the first time this season Wednesday night, hosting the Miami Suns in an exhibition game at the Convocation Center at 7 p.m.

Entering her 17th season at the helm of the UM women’s basketball program, head coach Ferne Labati returns eight letterwinners from one of the most successful teams in school history as she prepares to lead the Hurricanes into their inaugural season into the tradition-rich Atlantic Coast Conference in 2004-05.

Among those returning in 2004-05 include a pair of starters in junior forward Tamara James and senior guard Yalonda McCormick.

James, who sits at 14th all-time at UM in career points, has led the Hurricanes in scoring in each of her two seasons at UM and was recently named a preseason All-ACC Team selection by members of the ACC and national media.

Last season, McCormick led the Hurricanes with 5.4 assists per game and 3.2 steals per game and finished the season third on the team in scoring, averaging 12.2 points per game on her way to being named an All-BIG EAST Honorable Mention selection.

A trio of former of Hurricane players in MeChelle Murray, Alicia Hartlaub and Chanivia Broussard will return to UM as members of the Miami Suns. Murray was a four-year letterwinner at Miami from 1994-98 while Hartlaub spent four seasons at UM from 1999-03. Broussard is one of only 17 UM players to score 1,000 career points, totaling 1,482 on her four-year career from 2000-04.

Wednesday’s game will be broadcast live on the radio on WVUM 90.5 FM.

Tickets for the game are $3 and season ticket packages are still available for the 2004-05 season starting as low as $75. To purchase tickets or for more information please contact the Hurricane Ticket Office at hurricanesports.com or by calling 1-800-GO-CANES.