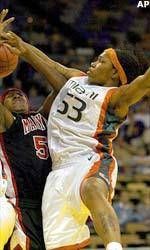 Miami Edged Out By Terrapins In NCAA Tournament

Maryland (18-12) plays the winner of the Austin Peay-LSU game on Tuesday.

Miami, which beat Maryland by 31 points last year, appeared to be on the wayto another easy victory, leading 32-23 with 5:50 to go in the first half whenChanivia Broussard injured her right knee in a pileup under the basket. Shewatched the rest of the half as Maryland took a 38-37 lead into halftime.

Broussard played the second half wearing a knee brace and led Miami (22-7)with 22 points and 11 rebounds. Shaquana Wilkins had 17 points and 10 rebounds,Yalonda McCormick scored 16 points, Tamara James had 15 and Melissa Knightadded 14.

The Terrapins outshot Miami 58 percent to 50 percent from the field – 63 to56 percent in the second half. The Hurricanes outrebounded Maryland 35-30.

Both teams had problems at the foul line. Miami made only 13 of 22 freethrows and Maryland 18-of-29, but 5-of-7 in the final 50 seconds to offsetthree Miami baskets.

Oliver put the Terps back in front 81-79 with a layup.

Maryland was up 86-83 with 10 seconds left. Wilkins drove to the basket andmade a 2-pointer as time ran out to leave Miami a point short.