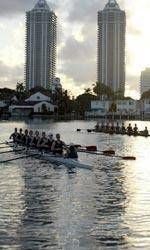 The regatta featured 29 dual races over two days, with six schools from across the country competing along with Miami, including Barry University, Central Florida, Connecticut, Loyola Marymount and Nova Southeastern.

“Overall we had some phenomenal events,” Head Coach Debra Morgan said. “We had some excellent racing over a two-day period. This was a great season-opener for us in that we had a lot of great results and performances on the race course. We also learned some lessons in how to improve our race strategy.”

Racing on a slightly choppy Indian Creek with head winds up to eight miles per hour, the Hurricanes jump-started the day with a first place finish in the Junior Varsity 8+ against Central Florida with a time of 6:59.00. The Junior Varsity 8+ remained undefeated through the fall season and continued their winning streak on the weekend with wins over LMU, UCF, and UConn.

The UM Varsity 8+ followed suit in the next event, overtaking Central Florida with a time of 6:56.75.

Miami’s Novice 8+ team fell to Nova Southeastern before the Hurricanes’ Junior Varsity 4+ A team took Miami’s sixth win of the day in the final race of the regatta, blowing by Loyola Marymount by almost 27 seconds with a time of 8:14.09.

“One of the highlights of the weekend was the christening of the Victor “The Hulk” Ishmael,” Morgan said. “We christened this boat in honor of our strength and conditioning coach, Victor Ishmael, who has been working with our team for the past two years and has a been a major contributor to what we are able to do on the water and in races.”

The Hurricanes will return to the water Sunday morning for an informal scrimmage against West Virginia before traveling to Clemson, S.C. on March 20 for a dual race with Clemson.