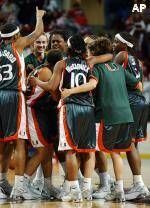 HARTFORD, Conn.-The University of Miami women’s basketball team will face Boston College in the quarterfinals of the BIG EAST tournament Sunday at Noon at the Hartford Civic Center.