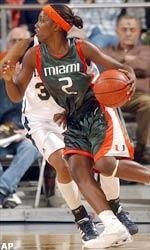 Courtney LaVere added 13 points as all 12 Irish players scored. Notre Dame’sreserves outscored Miami’s 40-2 as the Irish shot 58 percent en route toscoring their most points since a 107-65 win over Cleveland State in the openerof last season.

It was the worse loss for the Hurricanes since they were beaten 96-50 bytop-ranked Connecticut two years ago.

Notre Dame (18-8, 11-3 Big East), which stretched its home winning streak to17 games, clinched a first-round bye in the conference tournament. TheHurricanes (20-5, 9-5), swept by the Irish this season, had won four straightgames.

Batteast had her ninth double-double of this season. Megan Duffy and MoniqueHernandez added 10 points each for the Irish.

Miami, which held Seton Hall to 43 points in a victory Saturday, gave up 45in the first half alone against the Irish. The Hurricanes had 19 turnovers inthe half and trailed 45-29 at the break.

The Irish have won five straight against ranked teams to improve to 6-3against them.