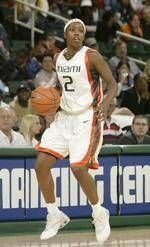 She became the 17th UM player to reach her 1,000-point career mark. She is the fifth sophomore at Miami to reach 1,000 points in two seasons.

The Hurricanes are back in action Wednesday traveling to face Notre Dame at 8 p.m. in the Joyce Center.