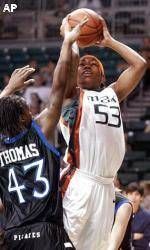 The victory was Miami’s fourth in a row and gave the Hurricanes their first20-win season since 1992-93.

Miami scored the first 12 points of the game and sealed the victory with a22-1 run to start the second half, pushing the lead to 63-19.

The Hurricanes (20-4, 9-4 Big East) also closed the first half on an 8-0run. That came after Seton Hall missed 14 of its first 17 shots and wentscoreless for nearly seven minutes following the opening tip.

James was one of four Miami players in double figures. She was 8-of-9 fromthe floor and perfect in six trips to the free throw line.