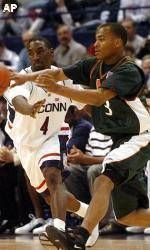 HARTFORD, Conn. – Connecticut coach Jim Calhoun felt a sense of urgency and he wanted to make sure his players felt it too.

He paced the sidelines, often animated and agitated, kicked over a chair, and screamed at turnovers. Ultimately, he liked the end result – a 76-63 win against Miami on Wednesday night to snap a two-game losing streak for his eighth-ranked Huskies.

“I know I didn’t show it all the time, but I’m actually happy,” Calhoun said after the game. “I just didn’t think we put the thing away.”

Rashad Anderson led the Huskies with 19 points, and Taliek Brown finished with a career-high 13 assists.

The Hurricanes (13-13, 3-9) have lost eight straight and were without their top player, Darius Rice, who was sidelined with a sprained right foot. Guillermo Diaz led Miami with 14 points and Armondo Surratt added 12.

Anderson got going at the right time, hitting three 3-pointers in the span of just over a minute in the second half. They came just after Miami pared down UConn’s 17-point halftime lead to seven.

“Somebody needed to step up,” Anderson said. “We didn’t have any scoring. Coach told me to make something happen. They gave me the ball in a great position and I just delivered.”

The Huskies led 41-24 at the break, but committed five turnovers in the first four minutes of the second half, and Miami took advantage.

“We threw the ball away five times just to make sure the coach got his blood pressure up as high as he could,” Calhoun said. “We still had enough time and talent to win the game, but we put ourselves in a position we didn’t need to be in.”

That’s when Anderson took over from the perimeter. His three 3-pointers fueled an 11-2 run, firing up the Huskies and the crowd. Miami never threatened after that.

Okafor, who leads the nation with 16 double-doubles, anchored a strong post game for UConn in the first half. He had nine points, nine rebounds and four blocks by the break.

“Coach was trying to inspire us, doing his thing on the sidelines,” Okafor said. “You couldn’t help looking over there and think ‘I’ve got to do more.”‘

UConn leads the series 15-8 in what has become a very competitive matchup. The last nine games had been decided by seven points or fewer. For once, UConn didn’t have to contend with Rice, who averaged 35.5 points against UConn last year. He was leading the team in scoring (16.7) and rebounding (6.3), but was injured in Saturday’s 91-74 loss to Syracuse and is expected to be out a 7 to 10 days.

“I thought we did a good job of trying to slow the game down and making them play defense as long as we could,” Miami coach Perry Clark said. “I still think we’re a pretty good ball club and we have a few more games to prove it.”

The game also marked Miami’s last appearance in Connecticut as a Big East team – it joins the Atlantic Coast Conference next season. The Hurricanes, 13th in the conference, are in danger of missing the Big East tournament because only the top 12 teams qualify.

The Huskies were coming off losses to Notre Dame and No. 5 Pittsburgh. Anderson said Wednesday’s victory was a crucial one.

“We let two games get away from us, we needed this win,” Anderson said. “This was the biggest game of the year for us.”