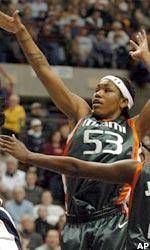 BLACKSBURG, Va. (AP) – Chanivia Broussard had 14 of her 22 points in thesecond half, and Miami’s 8-0 closing run gave the Hurricanes a 65-56 victorySaturday over No. 21 Virginia Tech.

Shaquana Wilkins made a layup and Miami converted six free throws in thefinal minute, including 4-for-4 from Broussard to seal the game. Broussardfinished 10-for-10 from the free throw line.

After Miami trailed by as many as five points in the second half, YolandaMcCormick made a 3-pointer to cap an 11-5 run and give the Hurricanes a 45-44lead with 10:12 remaining. In all, the game had four lead changes and was tiedsix times.

James scored 14 points and Melissa Knight added 11 for the Hurricanes, wholed 30-28 at the half. Wilkins had 11 rebounds.

Gardin paced the Hokies with 13 points and 14 rebounds, but Virginia Techshot 30.6 percent compared to 45.8 percent for the Hurricanes. Ieva Kublinaadded 11 points and Erin Gibson 10 for the Hokies.