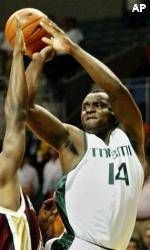 Miami’s loss, coupled with Virginia Tech’s 80-65 win over Georgetown,dropped the Hurricanes to 13th place in the Big East, a half-game behind theHokies. Only the top 12 teams qualify for the Big East conference tournament.

Dudley scored the Eagles’ first nine points of the extra session, and gaveBoston College (16-7, 5-5 Big East) the lead for good by hitting a 3-pointerwith 3:10 remaining.

Miami cut Boston College’s lead to 73-72 with 32.0 seconds left on a3-pointer by Guillermo Diaz and a pair of Darius Rice free throws, but droppedits fourth overtime game in as many attempts after Steve Hailey hit a freethrow and Rice and Eric Wilkins missed potential game-tying shots.

Diaz had 21 points, Robert Hite 13, Rice 12 and Rodrigue Djanue 10 forMiami. Neither Diaz nor Rice started the game, each sitting out the first 4:42because of an internal team matter.

Will Frisby hit two free throws with 0.8 seconds left, forcing overtime.Miami, though, had no answer for Dudley in the extra session.

Sean Marshall and Craig Smith each scored 12 points for the Eagles.