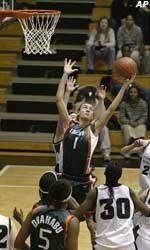 Chanivia Broussard (Miami, Fla.) scored 13 points and grabbed six rebounds in 15 minutes of action. She was a perfect seven-of-seven from the free throw line.

Tatjana Marincic (Mississauga, Ontario) came off the bench to score her career-high 12 points and six rebounds in 19 minutes of action. Melissa Knight (Philadelphia, Pa.) scored all 11 of her points in the first half.

Miami took the lead to start the game and never trailed the Red Storm. The Hurricanes owned a 38-31 advantage at halftime.

SJU pulled within six points with 1:31 left in the game, but Miami went six-of-eight from the free-throw line in the final minute to secure its eighth consecutive win over the Red Storm.

Miami leads the all-time series 18-6 over SJU. The Hurricanes shot 48.3 percent from the field, while SJU shot 32.8 percent.

The Hurricanes return to action traveling to face No. 21 Virginia Tech Saturday at 2 p.m.