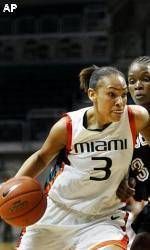 Miami (16-3, 5-3 Big East), which lost 59-50 to Notre Dame Wednesday night,fell behind early and rarely led against Rutgers, who also got 21 points fromChelsea Newton.

Down at the half, Miami cut Rutgers’ lead to 70-65 on a 3-pointer byChanivia Broussard with 2:14 remaining, and appeared to force Shalicia Hurnsinto a shot clock violation on Rutgers’ ensuing possession.

However, no whistle was blown, and Rutgers (12-7, 4-3) took a 71-65 lead ona free throw by Pondexter with 41 seconds left. A three-point play by ShaquanaWilkins cut the lead to 72-69 with 18 seconds remaining, but Pondexter hit allfour free throws down the stretch to seal the win for the Scarlet Knights.

Rutgers raced out to a 12-6 lead, but Miami put together a 9-0 run keyed byfive points from Yalonda McCormick, who scored 16 of her team-high 23 points inthe first half. Rutgers finished the half strong, scoring the final four pointsto take a 35-30 halftime lead.