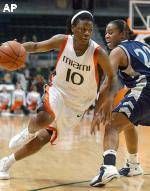 No. 18 Hurricanes Travel To Providence

PROVIDENCE, R.I.-The No. 18-ranked Miami women’s basketball team is back in action traveling to face Providence Tuesday at 7:30 p.m. in Alumni Hall in Providence, R.I.

The Friars (4-11, 0-4) are looking for their first BIG EAST win of the season, falling to Syracuse 55-50 at home Saturday afternoon.

Miami leading scorer Tamara James (Dania, Fla.) practiced with the team and is expected to resume her starting role in Tuesday’s match up with PC.

The Hurricanes own a 6-4 advantage when playing in Alumni Hall but lost to the Friars in the last meeting in R.I. Miami fell 69-64 to PC during the 2001-02 season.

Wilkins leads the team with 8.1 rebounds per game.

The Friars have one player averaging double digits, senior Kristin Quinn leads the team with 10.5 points per game.

The game will be broadcast live on WVUM-90.5 FM or you can follow the game live at hurricanesports.com.