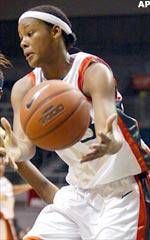 CORAL GABLES, Fla. (AP) – Shaquana Wilkins had 20 points and a career-high15 rebounds to lift No. 21 Miami to a 77-68 victory over Pittsburgh on Saturdaynight.

The Hurricanes extended the lead to 17 points early in the second half, butPittsburgh (6-9, 2-3) used a 12-4 run to make it 57-48 with a little more thanseven minutes remaining.

The Panthers couldn’t get any closer, though. Wilkins scored four of Miami’sfinal eight points, helping the Hurricanes stay unbeaten in eight games athome.

James was released from the hospital Thursday after a CT scan and X-rayscame back negative. She banged her head on the floor in a double-overtime winagainst Georgetown. Her neck was immobilized and she was taken off the court ona stretcher.