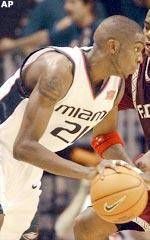 Bryant Matthews had 33 points and a career-high 16 rebounds for the Hokies(8-6, 1-2 Big East) but no other Virginia Tech player scored in double figures.

The Hurricanes started the second half with a 12-5 run capped by RodrigueDjahue’s free throw to take a 46-31 lead with 15:15 remaining.

Seven straight points from Matthews and a layup by Markus Sailes drewVirginia Tech to within three at 48-45 with 8:26 left. Matthews continued tosupply most of the offense for Virginia Tech, making a trio of 3-pointers overthe next six minutes, but Miami never let the Hokies get closer than five therest of the way.

The Hurricanes went on a 18-4 run with Darius Rice hitting three shots overa six minute stretch to take a 31-17 lead with 5:09 left in the first half.

Djahue scored 12 points for the Hurricanes, who held the Hokies to 30.4percent from the field compared to 54.3 by Miami.

Poor shooting dominated the first half for the Hokies, who went 2 for 19over the first eight and a half minutes of the game to fall behind 13-6 with12:17 remaining in the first half. Matthews tied it at 13 with 9:38 in thefirst half.

Starting quarterback Bryan Randall, moonlighting at guard for the basketballteam, hit a 3-pointer to cap a 9-3 spurt with 20 seconds left to make it 34-26at the break.