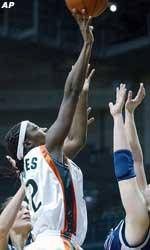 James left in the second overtime after banging her head on the floor. Herneck was immobilized and she was taken off the court on a stretcher. She wastransported to nearby Doctors Hospital with what team officials called astrained neck.

Several tests were performed, including a CT scan, but the results were notimmediately available.

Without their leading scorer, the Hurricanes (14-1, 3-1 Big East) held on towin despite shooting just 30 percent and making only 17 baskets.

McCormick was 3-of-12 from 3-point range, but her 3-pointer with less than aminute to play tied the game. Miami had a chance to win it in regulation withabout 20 seconds to play, but the Hurricanes didn’t get off a shot.

Trailing 56-55 in the second overtime, Georgetown had a chance to take thelead when Kate Carlin was fouled while chasing a loose ball. But Carlin missedboth free throws, essentially sealing the victory for the Hurricanes.