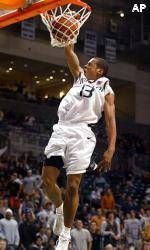 CORAL GABLES, Fla. – Trailing by two points with 3.9 seconds left in regulation, the Pittsburgh Panthers needed to go the length of the floor and score to avert their first defeat of the season. So they gave the ball to Carl Krauser, and he did the rest.

Krauser dribbled past three defenders for a buzzer-beating layup that tied the game, and No. 15 Pitt went to beat Miami 84-80 in double overtime Saturday.

Miami (10-5, 0-1) lost despite two clutch baskets by Guillermo Diaz, including one with 4 seconds left in regulation to put his team ahead 64-62.

Following a timeout, Krauser caught the inbounds pass deep in the backcourt and decided he was going all the way. He looked at the clock at midcourt, and it showed 2.3 seconds. He looked again when he reached the 3-point line, and it showed 1.9 seconds.

“The object was to get it to the rim and try to get fouled or make the layup,” he said. “That was my goal.”

So Krauser kept going. He dribbled around one defender and between two others before sinking his shot as time expired.

“Nobody really came over to cut him off,” Miami coach Perry Clark said. “But you’ve got to give him a lot of credit. He kept his poise.”

Krauser, Pitt’s leading scorer this season, had missed the past four games with a groin injury. Miami held him scoreless for the first 19:58, but he finished with 19 points and kept the Panthers in the game in the second half, when they trailed by as many as six.

Krauser also made a steal and two free throws in the final minute of the second overtime to help seal the win for the Panthers. They’re off to their best start since the school’s only unbeaten season (21-0) in 1927-28.

“We live for games like this,” said Jaron Brown, who had 16 points and nine rebounds for Pitt. “We like the pressure, the crowd’s against us, and we know everyone is going to come at us with their best shot.”

“Miami was just continuing to make shot after shot,” Dixon said. “They definitely played well enough to win. But somehow our guys had the toughness and smarts and willpower to fight through it and get it done.”

Rice’s dunk on a fast break put Miami ahead 68-66 in the first overtime. Krauser’s jumper tied the game again, and Brown hit a 6-footer with 33 seconds left to give Pitt the lead.

But after Pitt’s Mark McCarroll missed the second of two free throws, Diaz’s 3-pointer with 2.8 seconds left forced a second overtime at 71-all.

Taft’s layup put Pitt ahead to stay 79-77 with 1:52 to go. Brown intercepted a pass and made two free throws, and Krauser made a steal and two free throws for an 83-77 lead.