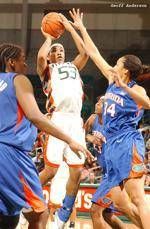 The Hurricanes remain undefeated improving to 7-0 on the season. Florida falls to 5-2 overall.

Miami snapped an eight-game losing streak to the Gators beating UF for the first time since the 1991-92 season. The Hurricanes also snapped UF’s 45-game win streak versus instate opponents. Prior to Friday’s setback, the Gators had not lost to an instate opponent since February 16, 1993, when Florida Atlantic defeated UF 84-63.Broussard also pulled down eight rebounds, picked up three steals and dished out three assists in the win.

After trading baskets over the first four minutes, Miami took the lead on a lay-up from Broussard at 16:22; the Hurricanes kept the lead the entire first half.

The Hurricanes led by as many as nine points in the first 20 minutes, taking a 38-34 advantage into the locker room at halftime.

In the second half the lead changed eight times, Miami owned the largest lead of seven points with 9:28 left in the game.

Florida’s Danielle Santos made one-of-two free throws with 2:38 left in the game to give UF a 70-69 lead, but Broussard hit one-of-two from the charity strip to tie the game before James nailed a three-pointer with 1:05 remaining to give the Hurricanes a 73-70 advantage.

UF’s Bernice Mosby hit a jumper, but McCormick knocked in her third three-pointer of the game, giving UM a 76-72 lead with 30 seconds remaining.

Mosby again answered for UF, hitting a three-pointer with 23.4 seconds left, drawing the Gators within one.

The Gators stole the ball off the in-bounds pass and immediately called a timeout. Florida had three shots all under the basket but missed all of them; McCormick came up with the rebound and was immediately fouled.

McCormick connected on both free-throws with 8.7 seconds remaining to give UM a 78-75 lead.

Florida turned the ball over bringing it up the floor and was forced to foul; James made both free throws to give UM a five-point lead, 80-75, with five seconds remaining.

The Hurricanes are back in action Tuesday hosting Dartmouth at 7 p.m.