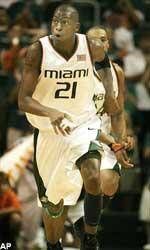 Miami To Host UMBC At The Convocation Center

ON UMBC
UMBC enters its game with Miami with a record of 2-2 following a 74-62 loss to Delaware on December 6. The Retrievers have been led in scoring this season by 6-1 junior guard Rob Gogerty who is averaging 11.8 points per game.

THE SERIES
Miami and UMBC meet for the third time with Hurricanes winning both previous contests. The two schools last met on November 11, 1989 with UM taking a 91-74 decision in Miami.

UP NEXT
Next up for Miami is an intra-state battle with Florida State on Sunday, December 14 at 400 p.m. at the Convocation Center. The Florida State game will mark the return of former Hurricane coach Leonard Hamilton. Hamilton, who is in his second season as head coach of the Seminoles, served as head basketball coach at Miami for 10 seasons before departing following the 1999-2000 season to take over the head coaching duties of the NBA’s Washington Wizards.

Miami’s game versus UMBC will not be televised. The game will be broadcast on the Hurricane Radio Network WQAM (560 AM). Joe Zagacki “The Voice of the Hurricanes” will handle the play-by-play with Josh Darrow adding analysis. Brian London will serve as studio host.

The game will also be broadcast on the University of Miami student radio network WVUM (90.5 FM). Fans can also catch the game on the web at hurricanesports.com.

A WIN AGAINST UMBC WOULD

Darius Rice recorded a season-high 28 points to lead the University of Miami to an 89-72 win over crosstown rival Florida International at the Convocation Center.

Guillermo Diaz came off the bench to hit 5-8 field goals en route to 15 points. Robert Hite added 14 for Miami, which connected on a season-high 57.4 percent of its shots.

ON THE COACHES
University of Miami head coach Perry Clark is in his fourth season with the Hurricanes and 15th season overall as a collegiate head coach. Clark is 55-40 (.579) at Miami while his career record in 14 seasons stands at 240-185 (.565).

VS THE AMERICA EAST
UMBC is a member of the America East Conference. Miami is 10-1 all-time against America East competition including a 93-58 win over New Hampshire last season. Miami has won six consecutive games versus the America East. The Hurricanes’ lone loss came on February 27, 1990 versus Hartford (62-58).

HIGH FLYERS
The University of Miami’s backcourt may be the most athletic in the country. Miami’s guards have an average vertical jump of 38.2 inches. All of UM’s guards have vertical jumps of at least 36 inches. Leading the way is freshman Guillermo Diaz who has a vertical leap of 41 inches.

RICE NAMED NAISMITH CANDIDATE
Darius Rice has been named one of 30 preseason candidates for the 2003-04 Naismith College Basketball Player of the Year Award.

VERSUS RANKED OPPONENTS
Miami was 1-2 against ranked teams this season. The Hurricanes are 19-19 versus ranked opponents since 1996-97 and have defeated at least one ranked team in each of the last nine seasons. Miami is 28-84 (.250) all-time against ranked teams including a 25-70 (.263) record since the rebirth of the program in 1985.

NO DAY AT THE BEACH
Miami’s 73-72 win over No. 11 Connecticut last season marked the ninth consecutive season that the Hurricanes defeated a ranked opponent at home.

MR. CLUTCH
Darius Rice’s three-point basket with 0.5 seconds left to defeat Connecticut on January 20th marked the fourth time last season the forward hit a three-pointer at the end of regulation to either win the game or send the game to overtime.

PLAYING HIS BEST AGAINST THE BEST

HURRICANES DISTRIBUTE DINNERS
Members of the University of Miami men’s basketball team as well as several student-athletes from the Hurricanes’ football, women’s rowing, women’s track, women’s volleyball, men’s tennis and women’s soccer programs handed out Thanksgiving dinners to six Miami-area organizations prior to the start of the women’s basketball exhibition game versus The Tournament of Champions on November 17 at the Convocation Center.

BEING THROWN INTO THE FIRE
Miami relied heavenly on four of its freshmen last season. Rob Hite, Armondo Surratt, Eric Wilkins and Gary Hamilton started a combined 50 games and all averaged 16 or more minutes per game. The 50 combined freshmen starts wee the most since the 1985-86 season, UM’s first since the program was dropped in 1971, when Eric Brown (27), Dennis Burns (20), Bryan Hughes (28), Kevin Presto (28) and Mark Richardson (18) combined to start 121 games.