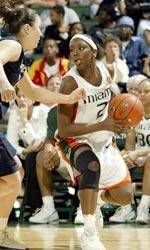 CORAL GABLES, Fla.-The University of Miami women’s basketball team is off to its best start in school history, with a 78-58 win over cross-town rival Florida International University Tuesday night, the Hurricanes improve to 6-0 overall.

The Hurricanes snapped a three-game losing streak to FIU (1-4) to earn its 30th all-time victory over the Golden Panthers. UM leads the all-time series 30-19.

Miami opened the game on a 20-4 run and maintained the double-digit lead the entire first half. UM owned a 42-27 lead at halftime shooting 56.3 percent from the field, compared to 39.3 percent for the Golden Panthers.

FIU came out and forced seven Miami turnovers in the first eight minutes of the second half sparking an 18-5 run, cutting UM’s lead to two (47-45) with 12 minutes remaining in the game.

The Hurricanes built the lead back as the Golden Panthers only managed to score eight points over the next 10 minutes of play. UM took advantage and went on a 25-8 run to taking a 19-point (72-53) lead with two minutes left in the game.

Miami shot over 50 (52.5) percent in the game for the third time this season and forced a season-high 27 opponent turnovers. FIU shot 40.4 percent for the game.

The Hurricanes are back in action Friday, Dec. 12 hosting Florida at 7 p.m. in the Convocation Center.