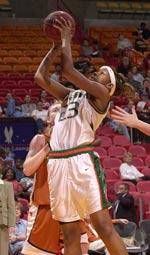 The Hurricanes improve to 5-0 on the season, the best start since the 1989-90 season. Bradley falls to 1-3 on the year after beating host Saint Mary’s in overtime Friday night.

All five Miami starters scored in double-digits. Shaquana Wilkins (Plymouth, Fla.) recorded her second double-double of the season with 14 points and 10 rebounds in 27 minutes of action.

The Hurricanes continued to build on their lead taking a 42-26 advantage into the locker room at halftime.

Miami continued to dominate the second half, holding its largest lead of 32 points (68-36) with seven minutes remaining in the game.

The Braves made a 16-2 over the last seven minutes but were unable to catch Miami.

The Hurricanes shot 41.2 percent from the field, compared to 37.7 percent for Bradley.

Miami hosts FIU in its home opener Tuesday at 5 p.m. in the Convocation Center.