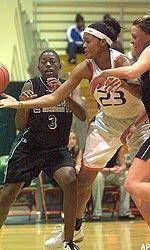 MORAGA, Calif.-Shaquana Wilkins (Plymouth, Fla.) scored 22 points to lead the Miami women’s basketball team to an 82-60 victory over Weber State in the first round of the Hilton Concord Thanksgiving Classic Friday night in Moraga, Calif.

Miami will face Bradley in the Championship game Saturday at 8 p.m. EST. Bradley knocked off host Saint Mary’s in the opening round.

Wilkins scored 16 of her 22 points in the first half and grabbed a team-high six rebounds in the win.

Chanivia Broussard (Miami, Fla.) scored all 16 of her points in the second half, while Melissa Knight (Philadelphia, Pa.) added 15 points for the third time this season.

Miami shot a blistering 59.6 percent from the field in the game, while Weber State shot 37.0 percent.

Miami opened the second half on a 17-4 run taking a 54-34 lead with 14 minutes left to play. Weber State pulled within 13 points (59-46) of Miami with just under nine minutes in the game but that was the closest they would come to catching UM.

The Hurricanes shot 63.6 percent in the second half outscoring the Wildcats 45-30.