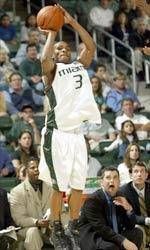 ON LOUISIANA-MONROE:
Louisiana-Monroe enters Sunday’s game with a 0-1 record following a 73-65 overtime loss at Bradley on Friday night. The Indians were led by senior guard Mark Keith who scored 14 points in the loss. Keith was the only Louisiana-Monroe player to score in double-figures.

Louisiana-Monroe, which finished 12-16 last season, features seven seniors on its roster including all five of its starters.

THE SERIES:
This is the first meeting between the University of Miami and Louisiana-Monroe.

UP NEXT:
Following the Louisiana-Monroe game Miami concludes the Las Vegas Tournament with games against Rhode Island (Nov. 25) and Bradley (Nov. 26) in Las Vegas, Nev.

The Hurricanes are back in the Convocation Center on December 2 against Stetson. The game will be the second of a double-header with the UM women’s team. The Hurricane women will face Florida International at 5 p.m. followed by the Miami-Stetson game at 8 p.m.

TV/RADIO COVERAGE:
Miami’s game versus Louisiana-Monroe will not be televised. The game will be broadcast on the Hurricane Radio Network WQAM (560 AM). Joe Zagacki “The Voice of the Hurricanes” will handle the play-by-play with Josh Darrow adding analysis. Brian London will serve as studio host. Fans can also catch the game on the web at hurricanesports.com.

ON THE COACHES:
University of Miami head coach Perry Clark is beginning his fourth season with the Hurricanes and 15th season overall as a collegiate head coach. Clark is 52-38 (.578) at Miami while his career record in 14 seasons stands at 237-183 (.564).

Louisiana-Monroe head coach Mike Vining is in his 23rd season as a collegiate head coach, all at ULM. His career record stands at 382-265 (.590).

A WIN AGAINST LOUISIANA-MONORE WOULD:
***Improve Miami’s record to 2-0 on the season.
***Mark UM’s 22nd straight home win against non-conference opponents.

DID YOU KNOW?:
The University of Miami has registered a 50-32 (.610) conference mark since the 1998-99 season. UM’s record ranks in a tie for third among BIG EAST teams over that period.

PLAYING HIS BEST AGAINST THE BEST:
UM forward Darius Rice shined last season in the big games. Against ranked teams Rice averaged 34.3 points and 6.0 rebounds while shooting 35-69 (.507) from the floor and 15-33 (.455) from three-point range.

SINGLE GAME/MINI PLAN TICKETS ON SALE:
Single-game tickets for all 10 University of Miami men’s basketball non-conference home games, including clashes with Florida State, Florida International and Florida Atlantic, are now available at the Hurricane Ticket Office for as little as $15.

UM is also offering a new Saturday “7” mini-plan, which includes tickets for all seven of Miami’s Saturday games, for just $140. The plan includes some of Miami’s biggest games including match-ups with intra-state rivals Florida International and Florida Atlantic, as well as BIG EAST games versus Pittsburgh, Georgetown, defending NCAA Champion Syracuse, and West Virginia.

Season-ticket packages for all 18 Miami home games, including defending National Champion Syracuse, are also available for as little as $175.

The Hurricane Ticket Office is open from 9 a.m. to 5 p.m. Monday through Friday and 9 a.m. to noon on Saturdays. Fans wishing to place orders by phone can call the UM Ticket Office at (305) 284-CANE in Dade, or 1-800-GO-CANES outside Dade County.