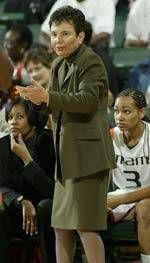 Miami will face host Morehead State Saturday at 4 p.m. in the opening round before facing Eastern Kentucky at 1 p.m. Sunday.

The Hurricanes went 1-1 during the exhibition season, beating the Tournament of Champions 106-58 in the last outing.

The game will be broadcast live on WVUM (90.5 FM) or via the internet at hurricanesports.com.