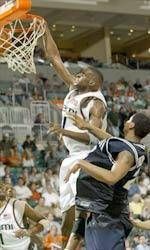 ON LUBBOCK CHRISTIAN:
Lubbock Christian University returns just three lettermen and two starters from last season’s squad that finished 17-17 overall including an 8-10 record in the Sooner Athletic Conference. The two starters however are two of the Chaparrals’ top three scorers from 2002-03.

Junior guard Brandon Jones returns after a stellar sophomore season in which he averaged a team-high 17.3 points per game while shooting 45.3 percent (175-386) from the field and 44.8 percent (90-201) from three-point range.

THE SERIES:
This is the first meeting between the University of Miami and Lubbock Christian.

TV/RADIO COVERAGE:
Miami’s game versus Lubbock Christian will not be televised. The game will be broadcast on the Hurricane Radio Network on station yet to be determined. Joe Zagacki “The Voice of the Hurricanes” will handle the play-by-play with Josh Darrow adding analysis. Brian London will serve as studio host. Fans can also catch the game on the web at hurricanesports.com.

ON THE COACHES:
University of Miami head coach Perry Clark is beginning his fourth season with the Hurricanes and 15th season overall as a collegiate head coach. Clark is 51-38 (.573) in three seasons at Miami while his career record in 14 seasons stands at 236-183 (.563).

Lubbock Christian head coach John Copeland is entering his 25th season, all with the Chaparrals. His record in 24 seasons is 363-315 (.535).

DID YOU KNOW?:
The University of Miami has registered a 50-32 (.610) conference mark since the 1998-99 season. UM’s record ranks in a tie for third among BIG EAST teams over that period.

PLAYING HIS BEST AGAINST THE BEST:
UM forward Darius Rice shined last season in the big games. Against ranked teams Rice averaged 34.3 points and 6.0 rebounds while shooting 35-69 (.507) from the floor and 15-33 (.455) from three-point range.

SINGLE GAME/MINI PLAN TICKETS ON SALE:
Single-game tickets for all 10 University of Miami men’s basketball non-conference home games, including clashes with Florida State, Florida International and Florida Atlantic, are now available at the Hurricane Ticket Office for as little as $15.

UM is also offering a new Saturday “7” mini-plan, which includes tickets for all seven of Miami’s Saturday games, for just $140. The plan includes some of Miami’s biggest games including match-ups with intra-state rivals Florida International and Florida Atlantic, as well as BIG EAST games versus Pittsburgh, Georgetown, defending NCAA Champion Syracuse, and West Virginia.

Season-ticket packages for all 18 Miami home games, including defending National Champion Syracuse, are also available for as little as $175.

The Hurricane Ticket Office is open from 9 a.m. to 5 p.m. Monday through Friday and 9 a.m. to noon on Saturdays. Fans wishing to place orders by phone can call the UM Ticket Office at (305) 284-CANE in Dade, or 1-800-GO-CANES outside Dade County.