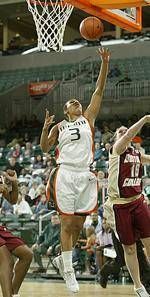 CORAL GABLES, Fla.-Six players scored in double-digits as the Miami women’s basketball rolled to a 106-58 victory over the Tournament of Champions in its final exhibition game Monday night in the Convocation Center.

Junior Melissa Knight (Philadelphia, Pa.) led all scorers with 22 points on the night hitting 9-of-12 from the field.

Freshman Imani Dhahabu (Vallejo, Calif.) scored 17 points in 23 minutes of action off the bench hitting 8-of-10 from the field.

Junior Yalonda McCormick (Miami, Fla.) was one assist shy of a double-double, scoring 15 points and dishing out nine assists on the night.

Tatjana Marincic (Mississauga, Ontario) pulled down a game-high 12 rebounds off the bench for the Hurricanes.

The Hurricanes shot 72.2 percent from the field in the first half taking a 59-33 advantage into the locker room at halftime.

The Hurricanes shot 61.5 percent from the field compared to 27.3 percent for the Tournament of Champions.