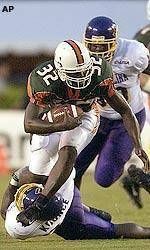 MIAMI (AP) – Miami has played its best in big games. This wasn’t one ofthem, and it showed.

Miami extended the nation’s longest home winning streak to 24 games, but didso with a lackluster performance.

“When you’ve got 80,000 people and you can’t even get the bus to thestadium, you don’t have to say a whole lot. You know it’s a big game,” coachLarry Coker said. “I called the Florida game a two-blimp game. We had theMetLife and the Goodyear blimp. We don’t have those every week.”

Certainly not against the Pirates (0-3).

The Hurricanes (3-0) opened the game with a touchdown on their third play,then stalled against the nation’s worst rushing defense.

East Carolina gave up 361 yards on the ground in each of its first two games- losses to Cincinnati and West Virginia – and was outscored 88-10.

Everyone expected the Hurricanes to cruise. They were 41-point favorites andtalked all week about using the game to work on minimizing penalties, reducingturnovers and giving up fewer big plays. They succeeded in doing all three, butdidn’t manage many scores.

Gore was one of the few bright spots until a fourth-quarter barrage fueledby turnovers.

He averaged 5.6 yards on 24 carries and became the first player in schoolhistory to run for more than 100 yards in each of the first three games.

Nonetheless, he said it was tough to get up for East Carolina.

“I could have had way more yards than I did,” he said. “I just neverreally never got into the game. I couldn’t get into a groove. I made a coupleof good runs, but I think some of them should have been touchdowns. I justwasn’t really hyped tonight.”

Gore sat out the fourth quarter, but had a good seat as Miami pulled awayfrom the Pirates.

It started with Baraka Atkins sacking Desmond Robinson in the end zone,causing a fumble that Santonio Thomas recovered for a touchdown that made it24-3.

“When we started bleeding, they smelled the blood and really came at us onboth sides of the ball,” said first-year East Carolina coach John Thompson,Florida’s defensive coordinator last season when the Hurricanes beat the Gators41-16 in Gainesville.

Brock Berlin, coming off an impressive game against No. 19 Florida, was13-of-23 for 179 yards with a touchdown and an interception.

Berlin completed 18 of his final 21 passes for 269 yards against the Gatorslast week, rallying Miami from a 23-point deficit to a 38-33 victory.

He gave the Hurricanes a 7-0 lead against East Carolina when he connectedwith Roscoe Parrish for a 50-yard TD pass on the third play.

After that, there was little excitement at the Orange Bowl. Miami went flat,much like it did after beating Florida and Florida State last season.

The Hurricanes thumped the Gators in Gainesville, then showed littlemotivation the following week in beating Temple 44-21. And coming off adramatic 28-27 win over the Seminoles, they struggled at West Virginia.

“The last thing I said to them in the dressing room was it’s not about EastCarolina or anybody else,” Coker said. “It’s about how we perform.”

The Hurricanes had 449 total yards of offense, but scored only 17 points inthe first half and led by just two touchdowns when the fourth quarter began.

“We’re a work in progress,” Coker said. “This wasn’t our best game. Wehaven’t played that yet. We want our best game to be the last one of theseason.”