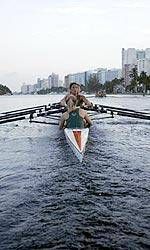 CORAL GABLES, Fla. (www.hurricanesports.com) – – The University of Miami women’s rowing team will compete this Saturday and Sunday against some of the top squads in the country at the Lexus South/Central Sprints in Oak Ridge, Tenn.

“The Central Regional is one of the toughest races in the nation,” coach Debra Morgan said. “We will face many schools currently ranked in the top 20. It’s an excellent experience for our rowers to see what kind of speed these schools have. We’re taking notes and doing our homework at this regatta. Our varsity four and varsity eight have outside chances of making the grand final which is extremely exciting.”

Racing will take place throughout the day, with heats beginning in the morning at 9 a.m. and semifinals finishing up in mid-afternoon at 4:15 p.m. The finals of the races will be held on Sunday starting at 9 a.m.

The NCAA currently divides Division I women’s rowing programs into five different regions: South, Central, Mid-Atlantic, New England and West. With the establishment of these groupings, regional championships have also been developed. In the Central and South Regions, Oak Ridge’s Melton Hill Lake was chosen as the site of the inaugural competition in 1997 and has hosted the event ever since.

The Hurricanes are hoping to improve on a bronze-medal finish in the BIG EAST Challenge.

“The (BIG EAST Challenge) was a very positive one for us in total,” Morgan noted. “Obviously, we would like to finish higher in every event. However, we made excellent progress in comparison with last year.

The Hurricanes earned bronze medals in the novice eight and the novice four and placed fourth in the junior varsity eight. Miami qualified for the grand final in each event.

“The process of building a team takes time,” Morgan cautioned. “As long as we see progress like we did this year at the BIG EAST Championships, we know we’re heading in the right direction.”

Results from the Lexus South/Central Sprints will be posted on www.hurricanesports.com following the race.