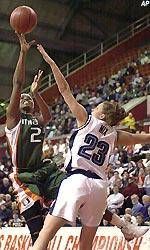 CORAL GABLES, Fla.-Freshman Tamara James (Dania, Fla.) was named to the 2003 BIG EAST All-Tournament team after leading Miami to the semifinals for the first time since the 1998 season.

James averaged 18.3 points and 7.7 rebounds in the tournament for Miami.

She led the Hurricanes to an upset victory over No. 18 Rutgers in the quarterfinals with 22 points.

James recorded her seventh double-double of the season in the loss to No. 14 Villanova with 18 points and 10 rebounds.

She was also named to the BIG EAST All-Rookie team and the BIG EAST Second team announced at the tournament banquet Friday night.

James led the conference in scoring all season with 21.0 points per game. She is also the highest scoring freshman in the nation at No. 10.

The Hurricanes await an NCAA bid announced Sunday at 5 p.m. on ESPN.