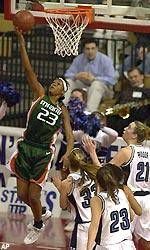 PISCATAWAY, N.J. – After carrying Villanova all season, Trish Juhline took the Wildcats somewhere they had not been since 1987 – the championship game of the Big East Conference tournament.

“I’ve been at Villanova for 25 years,” coach Harry Perretta said. “I haven’t seen a team that has overachieved more than this team. I’m really happy for these kids. We’re not overly imposing in any way physically. I feel bad for them a lot of the time, they have to work so hard on defense. I wanted them to get rewarded.”

Courtney Mix finished off a season-high 19-point effort by hitting two game-clinching free throws with 18.1 seconds to play in helping the third-seeded Wildcats (24-5) win for the 10th time in 11 games.

The Huskies, who will be seeking their 10th straight Big East tournament championship, beat Villanova 58-38 in Connecticut on Jan. 29.

“We know they are awesome,” said Juhline, who was 10-for-21 from the field and 6-for-10 from 3-point range. “They’re the best team in the country. They can score from every spot. They’re bigger than us, stronger than us. We’re just going to run our offense and (defensively) try to keep them in front of us, and make them make shots over our heads. If they go in, then they win.”

Tamara James had 18 points to lead seventh-seeded Miami (18-12), which put itself on the bubble for an NCAA tournament berth with wins over Syracuse and then-No. 18 Rutgers in the tournament.

“At this stage, with us beating Virginia Tech, beating Notre Dame at Notre Dame and beating Rutgers here, we’ve got some quality wins,” Miami coach Fern Labati said. “We’ve played Villanova tough twice and they’re a great team. I think we should go. The Big East has 14 teams, to take seven is like a drop in the bucket if they are good.”

The final score was the largest lead of the game for either team.

Villanova won the game from long range, knocking down 10 three-pointers.

Yalonda McCormick tied the game with 2:53 to play with the rebound follow of a shot by James in the lane.

Juhline then hit another long 3-pointer from the right edge of the key for a 60-57 lead.

On Miami’s next possession, Juhline got one of her five steals. Jenna Viani then made one of two free throws to give Villanova 61-57 lead.

“Trish, she’s so good,” Labati said. “She’s fading away, falling down and throwing it in. She’s a great player.”

McCormick narrowed the lead to 61-59 with a layup with 58.7 seconds to play and Miami had a chance to tie the game when Juhline missed a driving shot.

However, McCormick’s pass to James was tipped by Miami teammate Chanivia Broussard and Mix iced the game.

Miami was seeking to reach the final for the first time since 1993, when it won the title. Connecticut has won every title since then.

Neither team led by more than five points in the first half, which ended with Miami ahead 35-33. The Hurricanes scored the final six points with McCormick hitting a layup at the buzzer for the lead.