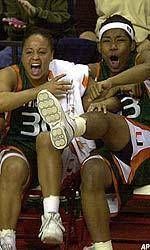 Yalonda McCormick added another free throw with 5.4 seconds left and theMiami (18-11) survived a last-second, running 35-foot, 3-point attempt byCappie Pondexter to advance to the semifinal game against either No. 20Villanova or Notre Dame on Monday night.

Pondexter finished with 30 points for Rutgers (20-7), but the sophomorepoint guard called the time out after diving to the floor to grab a loose ball.

Rutgers, the second seed and host school, had tied it on a long 3-point byMauri Horton with 10.6 seconds to play.

Miami’s inbounds pass was tipped and Pondexter went to the floor and put herarms around the ball as Hurricane players approached to tie her up.

The possession arrow was in Miami’s favor.

But before the tie up was called, Pondexter called the time out and theofficials stopped play.

McCormick, who had 12 points, 10 assists and 12 turnovers, immediatelystarted telling the officials that Rutgers had no time outs left. The officialsconferred at the scorer’s table and signaled a technical foul, a call that alsogave Miami the ball.

With the crowd booing loudly, James went to the line and calmly made herfree throws.

Rutgers nearly stole in the ensuing inbounds play, before fouling McCormick,who made the first of two shots.

Pondexter dribbled up court and wasn’t close on the final shot.

However, Rutgers is certain to get an NCAA tournament berth next week.

Trailing by 12 at the half, Rutgers got right back in it with an eight-pointrun to start the second half. The Scarlet Knights eventually tied it at 54 on alayup by Pondexter.

The game was tied again at 58 before Miami built its lead to seven points.It appeared headed to overtime when Rutgers made the late mistake.

The Hurricanes shot 15-for-27 from the field and forced 14 turnovers in thefirst half in taking a 43-31 lead.

The big spurt came late in the half when James hit a layup to spark a 10-0run that pushed Miami’s lead to 15 points.

However, Rutgers started showing signs of life in the final minute, scoringthe final three points to cut the lead to 12.

Miami’s 43 first-half points were the second-most allowed by Rutgers thisseason. Texas Tech had 48 early in the season in a 94-81 win.