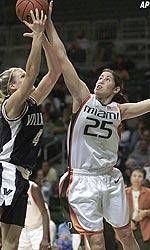 PISCATAWAY, NJ-Senior Meghan Saake (Wellington, Fla.) scored 23 points to lead the Miami women’s basketball team to a 77-64 victory over Syracuse in the first round of the 2003 BIG EAST Tournament in Piscataway, NJ Saturday night.

Miami seeded seventh in the tournament will face the No. 2 seed Rutgers in the quarterfinals Sunday at 6 p.m. in Louis Brown Athletic Center.

The Hurricanes improve to 17-11 overall, while the Orangewomen fall to 10-18 on the season.

Miami took the 29-28 lead on two made free throws from Tamara James (Dania, Fla.) with 5:21 remaining in the first half. Miami maintained control of the lead for the remainder of the game.

Melissa Knight (Philadelphia, Pa.) led the Hurricanes with seven points over the last five minutes of the half as the Hurricanes went on a 14-5 run to take a 10-point (43-33) lead into the locker room at halftime.

The Orangewomen cut Miami’s lead to five points (62-57) as Rochelle Coleman hit a three-pointer with 8:20 left in the game.

This was the closest Syracuse would come as the Hurricanes pieced together a 6-0 run increasing their lead to 11 (68-57) with five minutes left in the game.

James finished with 15 points hitting a perfect nine-of-nine from the free throw line. She led the Hurricanes with eight rebounds and three steals.

Knight and Chanivia Broussard (Miami, Fla.) added 11 and 10 points from the bench.

Miami shot .433 from the field while the Orangewomen shot .464 on the night.

Miami out rebounded Syracuse 40 to 31.