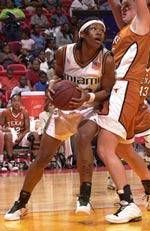 Broussard came off of the bench to score 20 points in 17 minutes of action. Entering tonight’s contest she was three points shy of the 1, 000 mark, pushing her career total to 1, 017.

With a Miami win over Georgetown and a Seton Hall loss to Pittsburgh the Hurricanes secure the No. 7 seed in the BIG EAST Tournament March 8-11 in Piscataway, NJ.

The Hurricanes will face No. 10 seed Syracuse Saturday at 6 p.m. in Louis Brown Athletic Center on the Rutgers campus.

The Hoyas came out strong shooting 56% from the field in the first half owning a one-point (30-29) lead at halftime.

Georgetown tied the game 64-64 on a three-pointer from Mary Lisicky with 2:32 left to play.

Shaquana Wilkins (Plymouth, Fla.) hit a jumper followed by a three-pointer from Broussard to put Miami back on top by five with 1:18 remaining in the game.

With the Hoyas down and forced to foul Miami connected on four-of-six free throws in the last minute to secure its second win of the season over GU.

Rebekkah Brunson paced the Hoyas with 24 points and 14 rebounds.

The game will air on FoxSports Net Thursday at 6:30 p.m.