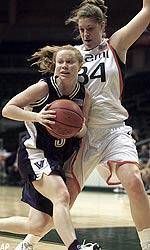 Miami led by as many as 11 in the first half and by nine early in the second half, but the Pirates battled back to take their first lead of the game with 1:41 left, 60-59, on two free throws by senior Cecilia Lindqvist.

Leslie Ardon hit a free throw with 1:18 left to give the Pirates a two-point lead, but Broussard connected on a layup with 28 seconds left that tied the game.

McCormick missed a jumper as time expired in regulation that sent the game to overtime.

After James hit two free throws, Ardon answered with a layup that made it 69-63.

Miami again cut the lead to four on a Broussard layup, but Ardon connected on two free throwswith 1:18 left that made it a six-point game again (71-65). Seton Hall hit 9-of-10 free throws in overtime.

The Hurricanes are back in action Saturday at Noon facing No. 21 Boston College for the second time this season.